At a time when (whether by choice or otherwise) we have more time to read, to think and to turn our minds to art, I thought you might be interested to peruse this potted history of Via Alibert, the fascinating street on which our gallery stands.

This street in Rome’s celebrated Trident, though short, has always played (and indeed still plays) an important role, in that it connects two streets historically associated with art and artists, Via del Babuino and Via Margutta.

Interior of the Galleria Paolo Antonacci with an installation by Baldo Diodato.

At the same time, however, it also led to the Teatro d’Alibert, one of the city's best-loved theatres in the 18th century, and hosted Giacomo Raffaelli’s celebrated mosaic works in the 19th century.

The premises housing the gallery today was also the site, for many years, of the well-known Trattoria Nanna Aliberti, a favourite with the area's artists and habitués.

I shall now hand you over to historian Francesca Di Castro, to whom all my fondness and sincere gratitude.

Formerly known as the Vicolo del Carciofolo or Artichoke Alley, a clear reference to the orchards on the slopes of the Pincio, the street can already be seen on DuPérac’s Map of Rome dated 1577. The name Alibert or Aliberti harks back to Count Giacomo d’Alibert who owned some land here which he had received as part of his wife Maria Vittoria Cenci’s dowry in 1663. He used the land to construct a court for playing Pallacorda, the ancestor of our modern tennis, pending being granted a permit to build a theatre, a dream he had been nurturing for some time.

It was his son Antonio, though, who was eventually to build the theatre, the Teatro d’Alibert or delle Dame on the corner of Via Margutta. The theatre opened in January 1717 and rapidly became one of the most successful theatres in the city. Its success lasted well into the 19th century, when it was purchased by Prince Alessandro Torlonia and completely rebuilt by the architect Nicola Carnevali, before being finally destroyed by fire at the hand of an arsonist in 1863.

Sheila McKinnon, from the Maggi Map, 1625

The theatre’s name was inherited by a hotel built on its ashes by Baldassarre Pescanti in 1872. The former theatre foyer adjacent to the hotel was home from 1870 to 1883 to the Associazione Artistica Internazionale, which held its first exhibitions here before moving to the Studi Patrizi at no. 54, Via Margutta. At no. 16a, Via Alibert, where the Galleria Paolo Antonacci stands today, small houses used for storage, already existing in the 17th century, were transformed in the 18th century into a home for the Raini brothers who owned a factory producing starch and face powder in the vast courtyards on the back.

Plaque on the door at no. 15 of Via Alibert

At no. 16a, Via Alibert, where the Galleria Paolo Antonacci stands today, small houses used for storage, already existing in the 17th century, were transformed in the 18th century into a home for the Raini brothers who owned a factory producing starch and face powder in the vast courtyards on the back. Between 1827 and 1830 the mosaicist Giacomo Raffaelli bought nos. 15 to 17, owned by the starcher Raini, on a piecemeal basis and comissioned the architect Giuseppe Valadier, who had already built a palazzetto on the corner of Via del Babuino for him, to merge the buildings and endow them with a single façade, thus giving them the aspect they still have today. It was here that Giacomo Raffaelli was finally able to achieve his dream of a “large factory of mosaics”, a modern business that prospered right up to the end of the 19th century. 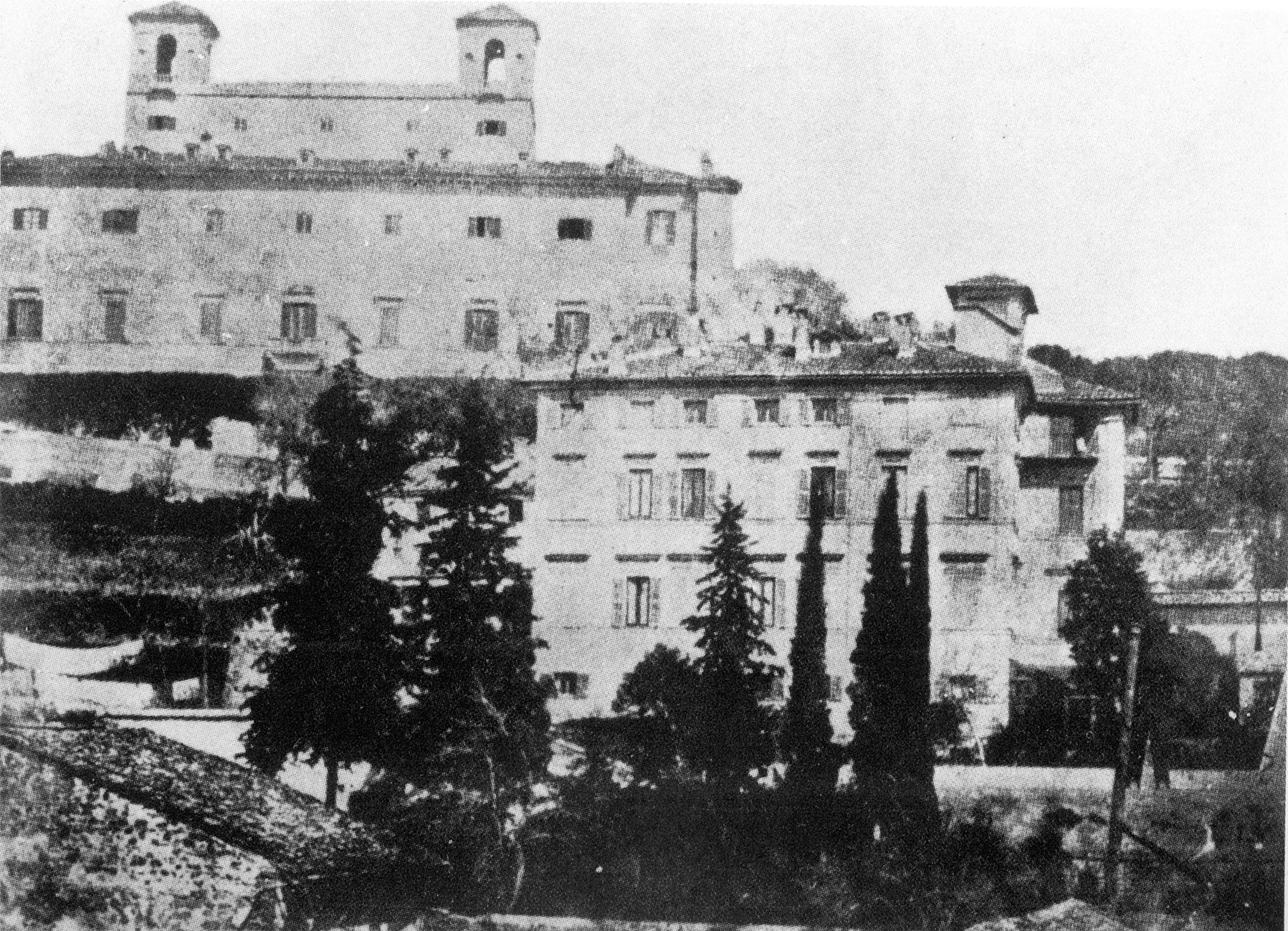 a) Via Alibert from via del Babuino

b) Villa Medici from via Alibert, Photograph by Borioni, 1850 c.

Via Alibert also hosted the meetings of the Accademia Inglese di Belle Arti which was already in existence by 1797, and of the Società Britannica ed Americana per lo Studio delle Antichità Romane founded by John Henry Parker in 1868. The church of San Giovanni Battista de La Salle was built in 1886 at the end of the lane, on land owned by the Naro family sloping up to the Pincio, as part of the complex known as the Collegio San Giuseppe run by the De La Salle Brothers of the Congregation of Christian Schools, a complex that still stretches today from Via Alibert to Piazza di Spagna, obstructing the view of the Villa Medici.

At the turn of the 19th century no. 16a was home to a celebrated Trattoria named Sora Nanna Aliberti, where all the artists and residents of Via Margutta were wont to meet. The tavern was famed not only for its Castelli Romani wine but also for its Roman cuisine, and indeed it was owned and run by a thoroughly Roman couple, Anna and her husband Guglielmo, with the help of their son Romoletto. We have a lively description of the family penned by the antique dealer Augusto Jandolo, a regular customer and witty wordsmith who owned the shop on the corner of Via Alibert and Via del Babuino in those years. Indeed its was Augusto Jandolo who revealed Nanna’s true name, Anna Ascani, and reported the rumour (put about by Hans Barth in his Osteria. Guida spirituale delle osterie italiane) to the effect that the mistress of the tavern had been Anselm Feuerbach’s favourite model in her youth. 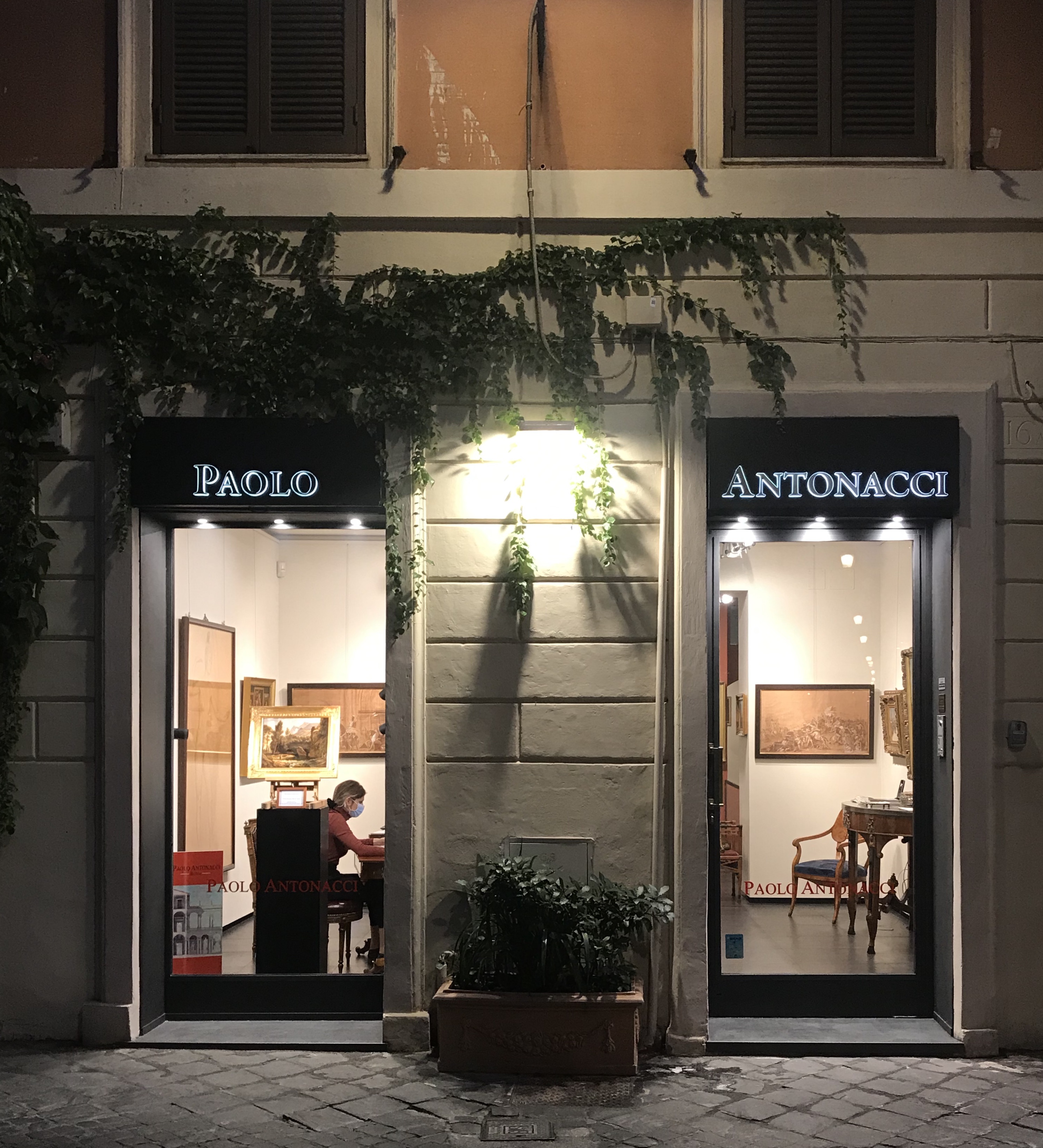 The Trattoria Sora Nanna eventually changed its name to the Trattoria Colombo but it continued to be used as a meeting place by the small and varied world of Via Margutta well into the 1960s.

In the 1990s the premises were acquired for their prestigious Rome premises by Fratelli Alinari S.p.A., the historic Florentine photographic firm that had been operating without a break since 1852.

In that spirit, Paolo Antonacci carries on the antiquarian tradition on those same premises today, after moving there from no. 141a, Via del Babuino in 2016 in order to continue the family business set up by his grandfather Emanuele at no. 146, Via del Babuino in 1916, and with the selfsame goal, namely fostering the knowledge and preservation of art and of the history of art through exhibitions both in Rome and abroad.

We will process the personal data you have supplied to communicate with you in accordance with our Privacy Policy. You can unsubscribe or change your preferences at any time by clicking the link in our emails.